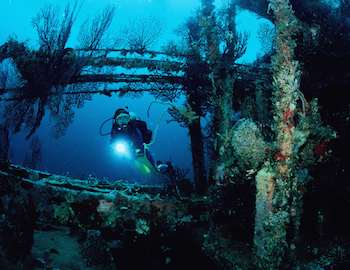 The largest wreck in the Caribbean is the BIANCA C with a weight of 18, 427 tons and 600 foot in length. Built in the South of France early in 1939 she launched the first time five years later in 1944 and called Marechal Petain. When the Germans retreated from France later that same year she was sank after which she got towed back in 1946 and renamed to La Marseillaise and became a cruise ship.

The unlucky ship was on her maiden voyage with a passenger count of 736 when she was sold and renamed again this time to Arosa Sky with an increased passenger capacity when she was on only one voyage before being sold again. This time she was named BIANCA C after the new owner’s daughter. Her only voyage for her new owners was from Naples to Guaira which included stops along the Caribbean and her fate was sealed when stopping in Grenada.

Her voyage in 1961 after anchoring at St, Georges harbour came to an end when an explosion occurred in the boiler room and she caught a fire that spread too rapid to save her. Only one of the 673 passengers on board could not be rescued and twelve were injured with a single crew member died from injuries. The ship was still burning when it was towed with efforts to get her far off Grenada’s southern tip.

The severe damage and heat broke the two lines and thus is she still there where she sunk after the lines broke and she sank to her final resting place. Her position makes for excellent yet dangerous and challenging diving while the marine life is outstanding. Spotted Eagle Rays, Reef and nurse Sharks, Mackerel, Jacks, Barracuda and schooling Atlantic spadefish are among the species that makes for a memorable and advanced dive experience.